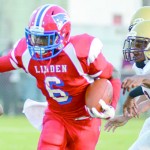 : Charles Blackmon, 6, takes a carry threw a host of Bulldog defenders. Blackmon would later score the game winning touchdown in the fourth quarter.

Late game heroics from both teams created an exciting finish, but when the dust settled it was the Linden Patriots who came away with a 13-12 thrilling victory over Washington County Bulldogs.
It would have been easy for the Patriots to give up after a late touchdown by the Bulldogs, but Linden never gave up.
“I’m proud of our guys for showing some fight and not quitting,” said Head Coach Andro Williams.
Linden was first to score in the contest with 3:28 left in the second quarter when C.J. Anderson connected with Jaleel Jones for an 81-yard touchdown. After a penalty negated the first try, Isaiah Scott connected on the only successful extra point attempt of the night to give the Patriots a 7-0 lead.
Washington County responded with a touchdown of its own with 1:03 in the first half when Curtis Anderson corralled a pass from Kevin Howard for a 17-yard touchdown.
Both teams would battle for field position and not score in the third quarter.
The silence was broken early in the fourth quarter when Austin Kinsey broke some tackles and took a carry for 62 yards to give Washington County its first lead of the night at 12-7 with 11:40 remaining in the contest.
From there the teams traded possession until late in the game with around three minutes left when Linden produced a long drive that got into the Bulldog redzone.
“We didn’t get in the first time, but our guys showed some resiliency and character by getting the football back, driving down and finishing,” said Williams.
After failing to convert on that drive, which stalled at the three-yard line, the Patriot defense forced a three and out and gave Linden another chance.
Anderson lined up in the spread and proceeded to scramble and throw short passes down the field.
“He (Anderson) was the one I got on the most during this game, but he was also the one who handled what was going on the best during the game,” Williams said.
Anderson rewarded the trust of his coach with an 11-yard pass to Charles Blackmon with one minute left to give the Patriots the final 13-12 lead.
“Washington County has a great football team and we’re on our way,” said Williams.
Linden finished with 256 total yards of offense with 155 yards coming on 44 carries and Anderson connecting on three of six passes for 101 yards and two touchdowns.
The Patriots return to action next week with a road contest against Keith High School in Orrville.