Turnovers proved to be costly for the Patriots as Linden fumbled the ball four times and fell short in an upset bid to Maplesville 20-7 at the Linden Athletic Field.
Maplesville moves to 4-0 and 2-0 in 1A Region 4 competition while Linden falls to 2-1 overall and 1-1 in the region.
The more disciplined team won here today, not just tonight, but in life. We have to do a better job mentally,” said Head Coach Andro Williams. “We have to figure out a way to be more disciplined throughout the course of the game.”
The teams had one drive an each in the first quarter yielding no score, but on the first play of the second quarter Maplesville scored on a 1-yard quarterback sneak by Nicholas Spencer. However, John Schoener missed his PAT but the Red Devils took a 6-0 lead with 11:55 on the clock.
Linden just kept plugging away and finally with 3:08 before the half, Christopher Robinson kept the ball on an option play up the middle for a 38-yard Patriot touchdown. Isaiah Scott added the extra point to give Linden its only lead of the night.
The third quarter went by with no score with both teams having scoring chances squandered due to turnovers.
The Red Devils ended the drought with an 8-yard romp by Corey Hall for a touchdown. Terence Dunlap pushed in for a two-point conversion to give Maplesville a 14-7 advantage.
“I’m proud of our kids for fighting and clawing,” said Maplesville Head Coach Brent Hubbard.
That effort was rewarded on the final play of the game when Terence Dunlap broke free for a 43-yard touchdown as time expired to win the game with the 20-7 final.
The win preserves a 28-game regular season winning streak and also extends the Red Devils’ overall winning streak to 19 in a row.
When asked if his teams was feeling the pressure of keeping those streaks alive, Hubbard said, “If they don’t they’re not human. The kids are used to winning and they’ve won so much. It’s a constant battle.”
Dunlap finished as the game’s statistical leader finishing with 158 yards and a touchdown on 23 carries for Maplesville
As a unit, the Red Devils with 267 yards of total offense with 234 of those yards coming on the ground.
“We weren’t as consist as we needed to be on defense,” said Williams.
Christopher Robinson finished the night 9 of 13 with 127 yards through the air and scored a touchdown on the ground along with 36 yards on 11 carries. Xavier McIntosh paced the Linden rushing offense with 71 yards on 16 carries.
The Patriot offense finished with 266 total yards, but the aforementioned turnovers handicapped production.
Williams said, “We feel good about where we’re going and where we’re trying to get to, but we had our opportunities tonight.”
The Patriots won’t have too much time to dwell over this loss, as they have to prepare for a trip to Mobile to take on a 5A school in St. Paul’s Episcopal.
Maplesville will host Tanner in a non-region matchup. 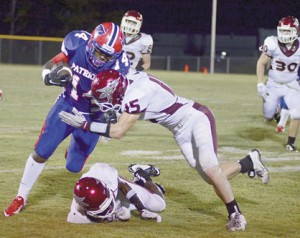 Xavier McIntosh looks for some tough yards against the Maplesville defense. McIntosh finished as the leading Patriot rusher.