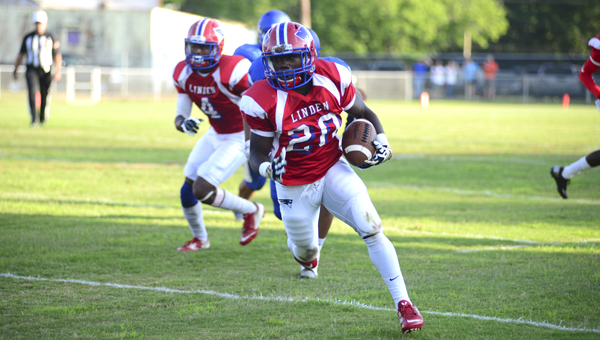 Justin Jenkins breaks free for a big gain against Winterboro during the Patriots’ spring game at Linden Athletic Field.

The Linden High School football team posted two dominate halves to shutout both Winterboro and Excel during the spring jamboree game in Linden on May 14.

“I was pleased overall with our performance for the most part,” said Linden Head Coach Andro Williams. “Anytime your defense can play lights out and not give up anything, you like the way you’re playing.”

The Patriots opened the night against with a 25-0 victory over Winterboro.
Charles Blackmon scored the first points of the night on a 35-yard run.
The returning starting quarterback Christopher Robinson then put the visiting Bulldogs away with three consecutive touchdown passes starting with a 35-yard pass to Dequan Charleston with 4:43 in the first quarter.
The two would connect again for a 10-yard touchdown with a second remaining in the opening quarter.
Robinson ended the aerial display with a 20-yard pass to Davontae Poole.
The Patriots outgained Winterboro with 367 yards of total offense compared to 136 yards for the Bulldogs with 222 yards coming on the rushing attack.

After a break to let Winterboro and Excel face each other, Linden returned to the field and earned a 21-0 victory over Excel.
Justin Jenkins scored on a burst from a yard out with 7:56 in the first quarter.
With 52 seconds remaining in the opening quarter, Deauris Jones busted loose for a 22-yard touchdown run to push the LHS lead to 14-0.
Robinson connected with Isaiah Scott for a 17-yard touchdown to cap the scoring.
The Patriots amassed 289 yards of total offense and limited Excel to just 52 yards.

“After going back and watching film, we played the way we wanted play but we made a lot of miscues during the course of the game,” said Williams of the team’s performance. “It was a lot of missed assignments, but I know you don’t have a lot of time to go over that in the spring so I’m not making a big deal about it. We just have to go to work and try to get better with the miscues as far as alignment and reading the keys correctly.”

When asked about his returning starters such as Robinson, Blackmon and Charleston, Williams said, “Those guys are going to do what they do, but we have to have other guys stepping up and taking care of their part as well and it starts up front on both sides of the ball.”