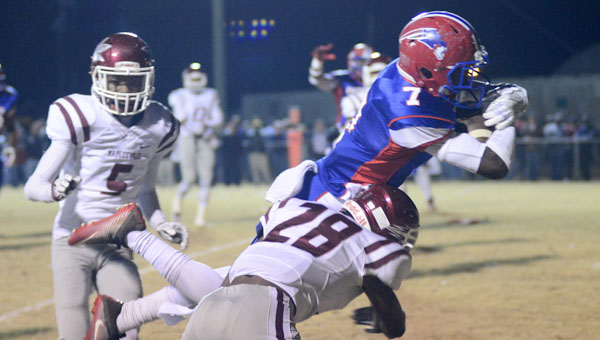 Dequan Charleston makes a diving leap towards the goal line during the Patriots’ loss to Maplesville in the fourth round of the AHSAA playoffs. Charleston scored the only offensive touchdown of the night for Linden.

Two great teams took the field on Friday, Nov. 25, but only one team could win and earn a trip to Jordan-Hare Stadium in Auburn.

When it was all said and done, it was the two-time defending Class 1A State Champions Maplesville Red Devils (14-0) who secured the victory and ended the title hopes of the Linden Patriots (13-1) and handed them the first loss of the season.

“The two big penalties early stalled some drives that kept us from kicking it down and punching it in, but that (Nathaniel)Watson kid was huge,” said Williams.

Watson had his hand all over the Red Devils offense. Taking snaps at receiver, tight end, and quarterback for power run plays.

“He was the difference in the game overall,” said Williams.

The Patriots got on the board first after recovering the short, opening kickoff and capping the drive with a 10-yard diving score by Dequan Charleston. Isaiah Scott added a PAT to put Linden on top at 7-0 with 9:58 in the first quarter.

After forcing Maplesville to punt on the ensuing possession, the Patriots started the next drive backed up on their goal line.

Two plays into the drive, Charleston slipped in the endzone resulting in a safety for the Red Devils.

Good fortune continued for the visitors as Watson returned the kickoff 68-yards and Terence Dunlap finished the job with a 3-yard score to put Maplesville on top 9-7 for a lead they’d never relinquish.

With 9:18 left in the first half, Dunlap scored for the second time in the evening from 4-yards out to extend the MHS lead to 16-7.

Driving down deep into MHS territory, CJ Robinson had a pass float for a little too long and allowed Dunlap to collect an interception on the Red Devils 3 yard line.

However, the Patriots wouldn’t go down quietly as heavy defensive pressure forced an error and Scott was able to take advantage with an interception and return for 42-yards and LHS closed the gap to 16-14 with 51 seconds left in the half.

However, from there all the big plays belong to the Red Devils as Watson scored on a 66-yard  reception from Thomas Schoener for the only score of the third quarter with 4:53 on the clock.

Then early in the fourth quarter, Watson took a direct snap 42-yards through the defense for a score to give Maplesville a 29-14 lead with 10:17 left.

Dunlap scored the final touchdown on the evening on a 12-yard carry to put the game out of reach at 36-14 with 6:22 left on the clock.

Despite the loss, the Patriots were able to set the AHSAA all-time scoring total in points on the season in just 14 games, scoring 764 points and topping the mark set by the 2004 Demopolis Tigers team.

However the goal for Linden was never to set a scoring mark, but to capture that elusive first state playoff title in school history.

“I don’t think it’s about the stats, said Williams. “This team has accomplished a lot outside the football realm. I think I’ve some kids grow up in front of my eyes. These kids have been around for awhile. They’ve worked and shown themselves approved by their work ethic and they’re going to be in successful in life.”

Maplesville moves on to the state championship at Auburn University where they will take on Pickens County.

Despite the setup being a north vs. south bracket style in the championship game, Pickens and Maplesville are only separated by an 85 mile stretch of US Highway 82.