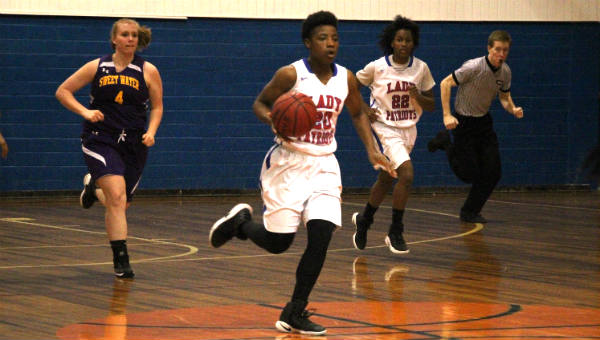 Facing foul trouble and a physical disadvantage, the Linden High School Lady Patriots needed a strong finish to capture victory. The need was met with a 20-8 run in the fourth quarter, which led to a 55-51 win  over Pleasant Home and a berth into the Class 1A South Regional in Dothan.

LHS trailed 43-35 entering the final quarter and got behind as much as 46-35 before the comeback started with 6:11 on the clock where Amber Richardson hit a field goal to start the Linden run.

Dajia Miller connected on two free throws to cut the lead to 46-39.

Almost a minute later Tomysha Boykin drained a three-pointer off an assist on Miller to get the Lady Patriots within four.

Richardson then scored two more points to bring the score to 46-44 with 5:56 left in the game and then hit a free throw to bring LHS within a point.

Boykin hit a free throw to tie the contest at 46 and then a triple to give the Lady Patriots a lead they’d never relinquish.

Miller hit two free throws with 45 seconds left to push the lead to 51-46, the largest lead of the day for Linden, before the 16-0 LHS run came to an end with two free throws by Katherine Waller.

Richardson and Boykin both hit two more free throws each to put the game on ice and deliver a 55-51 comeback win.

A trio of Lady Patriots scored in double figures as Richardson led the way with 17 points and nine rebounds. Boykin scored 15 points, including two key three-pointers, and grabbed five rebounds while Miller scored 11 points, totaled three rebounds and assited on both Boykin triples.

Pleasant Home was led by their 6-foot-4-inch center, River Baldwin, who dominated the stat sheet with 35 points and 18 rebounds. Rivers collected a fourth foul early in the final quarter which helped contributed to the Linden run.

However, foul trouble would be a key theme for the Lady Patriots as Richardson was tagged with three infractions in the first half and Imiya Agee fouled out in the fourth with six points.

As a team, Linden was whistled for 20 fouls.

LHS will face the winner of the Kinston and J.F. Shields game on Tuesday at 4 p.m. at the Dothan Civic Center.