Linden not able to get over hump in loss to PHHS 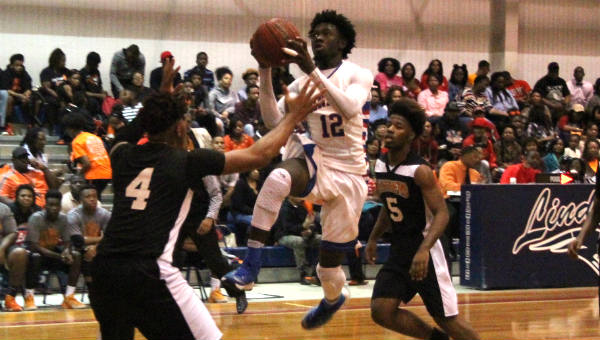 Dequan Charleston led the way with 15 points and grabbed four rebounds in a losing effort to Pleasant Home in Dothan.

Each time it got close, Pleasant Home found a way to get some separation to defeat the Linden Patriots 59-49 in the Class 1A south regional semifinals.

However, it was the third quarter that truly spelled doom and gloom for the Patriots despite only being outscored 19-13 which was enough distance between PHHS and LHS.

After Pleasant Home took an 11-7 lead in the fourth quarter, both  teams battled back and forth in the second with the Eagles taking a slight 13-12 edge in the quarter and a 24-19 halftime lead.

However, the offensive stalled there scoring just one more point as Pleasant Home pulled away for the 59-49 victory to advance to the regional final.

The Andalusia based Pleasant Home Eagles scored a monster performance from guard Robert Scott. The 5-foot-11-inch junior scored 29 points on 12 of 15 shooting and grabbed four rebounds in the victory ans was the only Eagle in double digits.

Dequan Charleston led Linden with 15 points, four rebounds and two assists while Isaiah Scott was the only other double digit scorer with 11 points as well as five rebounds. Deantre Johnson contributed a balanced game with eight points and seven rebounds.

Pleasant Home advances to the regional final to face the winner of Georgiana and J.F. Shields on Feb. 21.

The Patriots season comes to a close with a season record of 19-10.